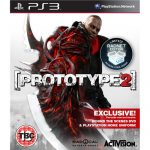 The sequel to Radical Entertainment’s best-selling open-world game of 2009,
PROTOTYPE® 2 takes the unsurpassed carnage of the original PROTOTYPE and
continues the experience of becoming the ultimate shape-shifting weapon. As the game’s
all-new infected protagonist, Sgt. James Heller, players will cut a bloody swathe through
the wastelands of post-viral New York Zero (or more simply…NYZ) with unparalleled
locomotion, building up a vast genetic arsenal of deadly, biological weapons and
abilities as they hunt, kill and consume their way toward the ultimate goal – to
kill…Alex…Mercer!

14 months have passed since New York became a disease-ridden war zone, and the man
responsible for it all – Alex Mercer – has become a ghost, a bogeyman whose shadow
looms over the city. You are Sgt. James Heller – veteran soldier whose life was
destroyed by Mercer’s release of the Blacklight virus. With his wife and daughter
casualties of the outbreak, Heller now serves in the military effort to keep the virus from
spilling over beyond NYZ. Repeatedly volunteering for the most dangerous, near
suicidal missions into the heart of the city’s Red Zone, Heller is hoping to die and take
as many Infected with him as he can in the process. Heller’s last mission sees his entire
unit massacred by a swarm of Infected, leaving him the sole survivor and putting him
face-to-face with the shadowy hooded figure overseeing the ambush from a nearby
rooftop – Alex Mercer – the man responsible for destroying his family, his city…his life.

Fueled by rage, Heller attacks but is clearly no match for Mercer’s abilities. Impressed
by Heller’s implausible survival of the Infected onslaught, Mercer sees Heller as a
potentially valuable asset for his grand plan and infects him with the virus, making
Heller his prototype.

Welcome to NYZ…it’s time to murder your maker!

IT’S HELLER VS. MERCER! – Alex Mercer made a grave mistake when he decided
to infect Sgt. James Heller with the Blacklight virus – he never counted on Heller
interfering with his plans. PROTOTYPE 2 features a fresh narrative following the
game’s new, iconic main character, Sgt. James Heller. Gamers will experience Heller
thriving with his new shape-shifting abilities as they go head-to-head with Mercer
and delve deeper into the game’s story, uncovering a secret that will rock Heller to
his core.
SHAPE-SHIFTING EVOLVED – Players will love experimenting with Heller’s
newfound powers and abilities as they tear through NYZ, battling and evading elite
military soldiers and vehicles on the ground and in the air, and hunting down and
consuming key targets to obtain information and dive even deeper into the game’s
story. Juggling between multiple shape-shifting weapons on the fly, like the all-new
trauma-inducing Tendrils, the razor sharp Claws or Blade Arm, and blunt and
devastating Hammer and Whip Fists (to name a few), players will wreak havoc on
their victims and the hordes of Infected abominations roaming the city streets in a
visceral celebration of blood, guts and dismemberment.

WELCOME TO NYZ! – The New York that humanity has come to know and love
over the years no longer exists…it’s now simply referred to as NYZ. As Radical’s all-
new vision for post-viral open-world New York, NYZ has been re-designed from the
ground up to enhance PROTOTYPE 2’s signature action-packed sandbox-style
gameplay, and as a mechanism to tell the game’s core narrative and side story
missions. As Heller, players will progress through NYZ’s three distinct zones, from
the heavily guarded militarized Green Zone, to the converted refugee and triage
shanty town camps of the industrial Yellow Zone, all the way to the Red Zone –
where the virus has completely overrun the city’s shattered skyscrapers and
population with infection and the risk of death at every corner.

MAKE HELLER YOUR PROTOTYPE – In PROTOTYPE 2 players can unlock new
viral abilities, upgrade, and create unique power sets for Heller throughout the
game’s main and side story missions. By exploring all that NYZ’s vast, open-world
has to offer, savvy players may stumble upon Infected Lairs hidden throughout the
city, and will be rewarded with genetic upgrades for Heller upon surviving the
horrors found inside. Additionally, by gaining access to the Blackwatch’s encrypted
computer network – Blacknet – information regarding key targets associated with
top-secret military projects throughout the city will be revealed. Using Heller’s
unique hunting ability, players can track down and consume these targets to obtain
dozens of interchangeable mutations to mix and match. With so many potential
viral load outs, players can customize Heller’s power set to their liking, making him
their prototype!